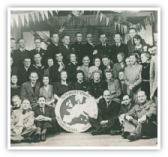 In 1932 as a result of an advertisement in ‘Motor Cycling’, a small group of motorcyclists who had been spending their holidays touring on the continent to Europe individually, met in a pub in London with a view to exchanging information of experiences abroad - and so the I.M.T.C. was born.

Travel on the continent in the thirties was very different from today.  The main roads mainly consisted of mile upon mile of ‘pave,’ horrendous cobbled surface or just water-bound dirt roads.  There was little motor traffic, much was horse-drawn and the combination of appalling roads, horse shoe nails, and bikes with girder fork springing at the front only, made tyre and mechanical troubles plentiful.  Hotels and garages were scarce and political problems were appearing on the horizon. But in spite of these difficulties, these early tourists persisted with their travels and spreading the word on their return gradually increased the membership of the club.

The original group in London was soon supplemented by the formation of regional groups and a Club magazine was published to maintain contact between members.  The more daring amongst the membership soon began to travel to North America and the Sahara Desert, to Turkey, the Arctic Circle, Canada, and Poland, and the slightly less intrepid to all parts of Western Europe.  Some members had unnerving experiences with frontier guards and one or two spent nights in jail.  But still the club grew, and in 1938 the first organised tour was undertaken.  These organised tours were called ‘Partitours’.

The war years suspended foreign touring – for pleasure anyway – but after cessation of hostilities in 1945 the club began to attract membership from returning ex-servicemen who had their appetites for foreign travel whetted during their time in the forces.  In 1950 membership reached 400, which, at that time, was the maximum number the club wanted to accept to ensure that it did not become too impersonal.

The regions soon developed extensive social activities, and at the same time, inter-regional contact was maintained through national weekend rallies.  The ‘Partitours’ had become so popular that at least two were arranged each year, principally for the benefit of first-timers.  Members also formed their own groups or went alone.  There were few places this side of the ‘Iron Curtain’ (younger members - please Google it) that had not seen the blue badge of the I.M.T.C.  Eventually, even the ‘Iron Curtain’ was breached when members from the club went to F.I.M. rallies in Poland, Czechoslovakia and Russia.

The club today has members in many parts of the world and has seen its original purpose, to encourage foreign touring by motorcycle, fulfilled beyond the wildest dreams of the early pioneers.  Individual members still make epic journeys, which compete for the Jock West Trophy for the most meritorious I.M.T.C. tourist.

Although foreign travel has become much easier, the club still has a place, drawing on its accumulated experience, providing enthusiastic motorcycle tourists with support, information, advice, assistance and camaraderie on the tours.