Where to go for our main holiday in 1995 was the question on our minds.  After about five minutes of discussion, I said to Anne “What about the Ukraine?”  The reply was a simple “Yes” (as though we were going to Morecambe).  Soon we were in touch with a Travel Agent specialising in Eastern Europe, who acquired our visas and gave some accommodation ideas.  The ideas were OK but the accommodation booking turned out to be a big headache. Even though the office he dealt with was in the Ukraine, the hotels etc. just did not reply.  It was not until 4.30 pm the day before we left home that we got our addresses and contact numbers.

Both bikes (Honda ST1100 Pan European and Honda CBR 600) had been serviced and were ready for the off.  We sailed from Hull to Rotterdam and crossed Holland and Germany.  The first night’s stop was at Gerwisch near Magdeburg, followed by an overnight stop at Legnica in Poland.  Before entering Poland, we filled our two petrol cans with the best of German fuel – this was to act as our emergency ration should we experience any difficulties in the Ukraine.

We had decided to spend Saturday and Sunday nights in Krakow so that we could have a day to look around the city.  The bikes were left in the secure car park at the hotel and we spent a full day looking round this lovely walled city.

Next morning, Monday, it was raining hard.  We splashed through the morning rush hour and got drenched by lorries passing either side of us.  Having covered the 150 miles to the Ukrainian border, we found hundreds of cars waiting to cross.  We went straight to the front of the queue and waited.  Going through the first check, we got a stamp sized piece of paper and at every following check, this got stamped and initialled until one hour later a smiling Ukrainian soldier took it off us and waved us in.  Suddenly it had stopped raining and the skies were blue.  A fifty mile run took us to L’viv to meet a lady who was to be our host in this large city for two nights. 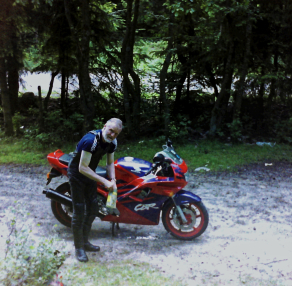 Here we had our first taste of what was to be the main problem of the holiday – the roads!  L’viv’s streets were built by the Austrians (God knows how many years ago it was) and they were at that time mainly badly worn cobbles, which were in a terrible condition, certainly the worst surface we had ever seen.  They were so polished and slippery that even in the dry Anne’s feet were slipping away when she stopped.  When we parked at the roadside, we were surrounded by the happy smiling faces of about 40 plus people, all wanting to help and not one of them had ever seen a Honda.  They were gob-smacked!  Not one of them could speak English but they all tried to give us directions.  Eventually a young lady who could speak English appeared and offered to help.  Anne asked if she could telephone Helena, our contact, tell her where we were and ask if she would come and collect us.

At this point I should mention that the Ukraine had not got any proper money – they had what they called ‘Koupons’.  With about three and a half million of these, Anne went in search of a cup of tea while I waited for Helena.  Half an hour later we were in a secure car park with 200 Ladas and a car park attendant who had an Alsatian dog and a machine gun.  With the bikes covered up we were happy.

Helena lived in one of those vast concrete apartment blocks common to the former Eastern Bloc.  The water was on a communal system and the hot water had been turned off for the summer (don’t ask me why – I would have thought that in the heat of the Ukrainian summer you would need hot water to wash more than ever)   They were working on the cold water system and it came on for only two periods of three hours each day and, of course, we had missed them both.  However, Helena had heated a bucket of water for us so that we could have a bath which, after the downpour we had had earlier that day, was like heaven even though there wasn’t much water – one bucket to join at.  The flat was immaculate, though old fashioned, and Helena was a good cook, although one morning she gave us steak, mashed potato, peas and salad for breakfast.  Even though it was at the wrong time of day it still tasted good. 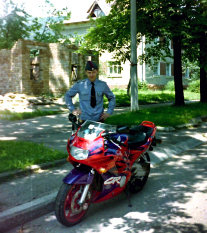 Unfortunately, the next day was showery so we opted to do the touristy bit in Helena’s Lada, accompanied by Irena, her friend, who could speak better English.  They showed us around an open air museum and the city itself, including the ex Headquarters of the KGB, finishing off with a locally brewed beer in some caves under the brewery above.

We left the next morning and Helena showed us the way out of the city via a filling station where we bought some 93 octane petrol - which came from Hungary they proudly told us.  We said goodbye to our new found friend and headed for Truskavec along a dual carriageway which was in a very bad state of repair.  The form was to drive wherever the best surface was, always keeping a watchful eye out in front for the damaged, potholed or even non-existent road surface.

Place names provided a temporary setback as we were up against the Cyrillic alphabet, so L’viv looks like ӅЬВIB and later Uzhorod was ӮЖҐOPOӅ.  It became my homework every evening to try my best to translate the names into the cyrillic alphabet.

The scenery changed from flatlands to rolling hills until we arrived at the spa town of Truskavec and the Hotel Beskid.  The ride of eighty miles from L’viv had taken four hours, but we still had time to look around this holiday town and see the Ukrainians at play.  One of the things they liked to play with was the hotel lift.  It took us ages to get in it because every time the door opened it was full of the same people, who were just going up and down in it.  I don’t think they had ever seen a lift before.

The next day we left Truskavec and headed for Jaremca, not knowing that this was to be our worst day.  The route we had planned in England turned out to have some of the worst roads we had yet encountered.  On some stretches there was just the occasional strip of tarmac that had survived.  At one point, the road was supposed to go straight across at a ‘T’ junction, but it just fizzled out straight across had gone and there was nothing but a field there.  Another thing that fizzled out was petrol.  It was quite normal to go fifty miles between filling stations and then find a long queue at the one pump.  Some filling stations had pumps marked ‘93’ but the petrol that came out was 76 octane.  We sweated in the heat and we sweated when we put the 76 octane in the tank of the CBR, but Mr Honda looked benevolently on us and both bikes ran OK – granted we weren’t going over fast on the bad roads. 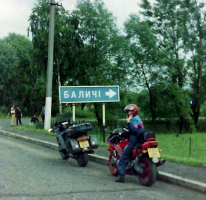 As we neared the Carpathian National Park the scenery gradually changed to what we would know as typical Black Forest type, with the occasional higher peak.  The temperature was about 35o and we really felt it every time we stopped to check the route or were stopped by the Police for a document check, which occurred two or three times every day.  The Police were all very friendly and had a good look at the bikes before they let us go.

We arrived in Jaremca to find we were not in the hotel on our paperwork, but had been moved down the road to a restaurant/roadhouse type place.  Galina, the lady who owned the place, showed us a cabin on the hill behind the restaurant.  The road up to it and the garage was just a building site road because they were building some new houses for the political elite.  We knew we couldn’t get up there and there didn’t seem anywhere else to leave the bikes.  Because she was afraid that we wouldn’t stay, she insisted that we take a look at the cabin.  It was all new, had a lounge, bedroom and bathroom and, as Galina proudly pointed out, HOT WATER!!  She said that we could put our bikes inside the roadhouse storeroom after about 9 pm, so we decided to stay.

After a nice hot shower, a meal and a couple of beers, things didn’t look too bad.  We spent a couple of lazy days here walking to the village, seeing the local sights and going for short rides.  It was just about impossible to stray far from the main roads because of the bad conditions.  As for eating, we ate like Lords with all the food being locally grown and fresh.  Also coming to the roadhouse for an evening was a group of children from Chernobyl who had been sent there for a holiday and some fresh air.  Every day we were told – “dinner at 7.30 pm after Chernobyl children”

At 7.40 am on the Sunday morning we left Jaremca to head to the border at Uzhorod.  When we got to the bikes to load them up, Anne found a nice rose on her bike that Galina had put there.  The roads were bad until Rachid but improved as we got closer to the border.  Refreshments were usually a table outside a house with a few bottles of lemonade and a flask of hot water to make coffee.  The border crossing into Slovakia was a short affair of half an hour.  The roads were brilliant – what a contrast since the last time we were there in 1986.  We made good time in fine weather until the one man in the world that everybody knows of gave us a problem.  The Pope was visiting Bratislava and although he was 80 miles from where we were, we kept getting diverted from our chosen route and we didn’t arrive at our pre-booked hotel in Strebske Pleso until 7 pm. 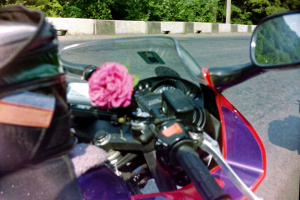 We had a lazy start on the Monday and headed for Hovezi in the Czech Republic and the annual rally of the Zlin Motorcycle Club (The Four Stroke Rally) where we met up with Norman Archard, Len Cottom and Peter & Emmie Cummins.  We had a trip to the Tatra Museum and spent most of Wednesday lazing around the campsite.  In the afternoon we went to the prize giving and, guess what – IMTC was awarded the prize for the 2nd Largest Club Attendance  and Len got the Oldest Rider award.  Anne got the furthest travelled Lady Rider award and Peter, coming from Australia, got the award for The Furthest travelled Man and also one for being the first to arrive at the Rally. 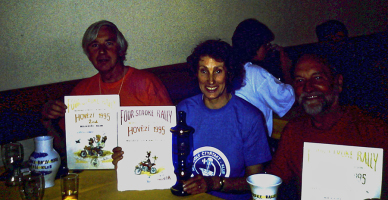