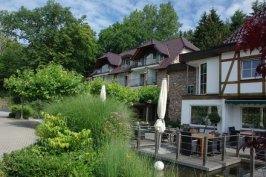 After a very wet journey from our previous night stay in Ypres, there was nice and friendly welcome as we arrived at the Seegarten Hotel.

Dave Richards and the others that arrived before us were out the front chatting and enjoying themselves.

Our room was plenty big enough with a good shower room and a comfy bed. The radiators were turned on to dry out our over suits, crash helmets and gloves. It was hot shower time then off down to meet up with the others and to try out some of their beers.

It was a really nice atmosphere here in the hotel with the staff being very friendly and helpful and outside as other IMTC Members arrived that we (myself & Hazel) hadn’t met before, but quickly got to know. Everyone was hungry and looking forward to the evening’s meal.

A big extension had been added to the side of the hotel together with a glass front swimming pool on the top floor.

7:30pm was meal time and off we all wandered upstairs to the room set up for us to eat our meal in. Beers were ordered and out came the courses. The starter, meat and desert courses all tasted superb. To start with I thought there is not a lot here, but I was wrong, it filled me up and was just enough to be full and not “stuffed......

We would recommend this hotel to people travelling in this area. We didn’t leave too early in the morning as we wanted to wander down to the lake and the Dams for the views and photos.

Drove into the town of Quedlinburg, along thin cobbled streets and into the back of the hotel to park the bike & let the Mrs off !

Found the hotel to be ok, rooms ok and clean, but not that friendly, pleasant, but not friendly.

Both evening meals & breakfasts were plentiful and tasty.

We had the day visiting the town & castle of Quedlinburg. It was raining for most of the day, but that didn’t stop us as it was on with our Pacamac’s and tourist mode here we come.The plan was to make our way to the main square and go from there.

After having our photos “Bombed” by Paul Robinson and his Crew it was coffee & ice cream time, next it was looking at the beautiful buildings with their painted exteriors and old beams on our way to the castle.

The castle was a short walk from the square and well worth it as it had lovely views of the old town and a pretty garden to wander around in.

After the castle we made our way out of town to the museum, but we couldn’t find it as it was somewhere over behind the Audi dealer, all we could find was houses, so we wandered like lost sheep for a while and then returned to the old town via another route.

As we entered the old town a resident in their car came up to the road to the big shinny bollard that was blocking the way. They swiped their card at a post by the bollard and “Hey presto” it sank to the ground....Yup you’ve guessed it , as the bollard rose back out of the ground ....Mr. Ian Brown jumped on it and  practised his fairy impression, and most realistic he looked as well.

More coffee was called for as we wandered over to the other side of the old town and investigated more, before it was time to return for the evening meal and a few beers.

After leaving Quedlinburg it was onto Colditz Castle,which was great as this is a place I have wanted to visit for a while now.

The sun was out again and it was a hot day. We parked bike up in the square and joined Paul & Tricia Hannon who were already having “Coffee Time”.  We had a little more than coffee time as you can see by the photos, we certainly do excel ourselves when it come to treats!!

After our treats it was onwards and upwards into Colditz.

Our guide was very informative, telling us all about the outside areas of the castle and what went on here. A little disappointing that we could explore more of the inside, but it was still being restored as it has apparently been for quite a few years now. I would love to go back when it has all been finished as it would be great to see more of the piece of our history.

Arriving at about 4:30 pm after a good ride from Church of Bones in Kutná Hora.

Turn left off main road, onto small cobbled streets in the historic town of Třebíč, turn left up a steepish cobbled street and Hotel Joseph 1699 was on our right.The owner came straight out and opened the secure garage parking for us behind the hotel

A nice clean, comfortable & very friendly hotel that was about 4+ old houses blended together, this was amusing to me as corridors led to a few rooms then down steps to the next lobby and rooms as the hotel worked its way down the hill that the houses were originally built on. The interior design and quality were very good for such a higgledy-piggledy hotel.

I found on the web before leaving home a good recommended restaurant up by the old Jewish cemetery. So after showers off we wandered to the restaurant. It was a good walk to the  Vinohrádek nad Babou restaurant as  Ian – Sue – Dave – Carole and Wifey Hazel kept letting me know, “Are you sure it’s down here” & “How much longer” were the repeated comments ... Oh ye of little faith. Round the corner of the pathway and there it was a good clean looking restaurant with a log style building.

The food was superb, good beer, friendly banter with the waiter and even better was the price.  The only problem as we found a lot in CZ was the bloody wasps, so a lemonade trap was made and set up a few meters away.

The walk back to the town for a few beers was a good work off for the food. We missed Shaun & Simone by about 10 minutes as they also asked about and ate in the same restaurant.

When we arrived back at the hotel we found that the top patio and entrance area were taken up with bikes crammed in like sardines as there wasn’t enough room in the garage for all to squash in. This didn’t seem a problem as most were smaller bikes,  and they were all pulled out easily in the morning,(No Graeme, my fully loaded GS Adventure was down there:Webmaster) but this could cause problems for large tours and secure parking here.

Today is our 5th Wedding Anniversary and we had a great little ride down to Gummersbach from Wurzburg.The Wyndham Hotel was easy to find. It looked a little bit of a higgle pigglety tardis hotel with function rooms off everywhere and the hotel stretching back off the road for a long way, which you don’t realise from the front view.

The rooms were ok but did need sorting as our shower was tiny, with miles too much furniture for the size of room, also hardly any air breeze in room even with window fully open. Our wedding Anniversary cards from family & friends that I had quietly packed and hidden on the bike were opened by Hazel and put out in the room. She was a happy lady for not only being married to Moi for 5 years, but having her family here with her by way of the cards xx

The swimming pool made up for any room problems as this way a fantastic end to a great vacation, the water was just right, we had fun.

The evening meal was good and plenty of laughing going on especially with the swords left on the tables for our amusement, Mr. Shaun Trueman.

Alan Abbott made a nice speech to thank Dave for his hard work in sorting this and as quoted “Probably the best Partitour a lot of the members have been on”.

We had a whip around for Dave to enable him to buy another Harley Davidson T shirt from the local Gummersbach dealer oh and some more “Special” Harley polish for his new Tractor.

Thank you Mr. Dave Richards and We “Sons of Sheppey” look forward to your next Partitour, as this was Great, so next one will be Bloody Brill ....xx